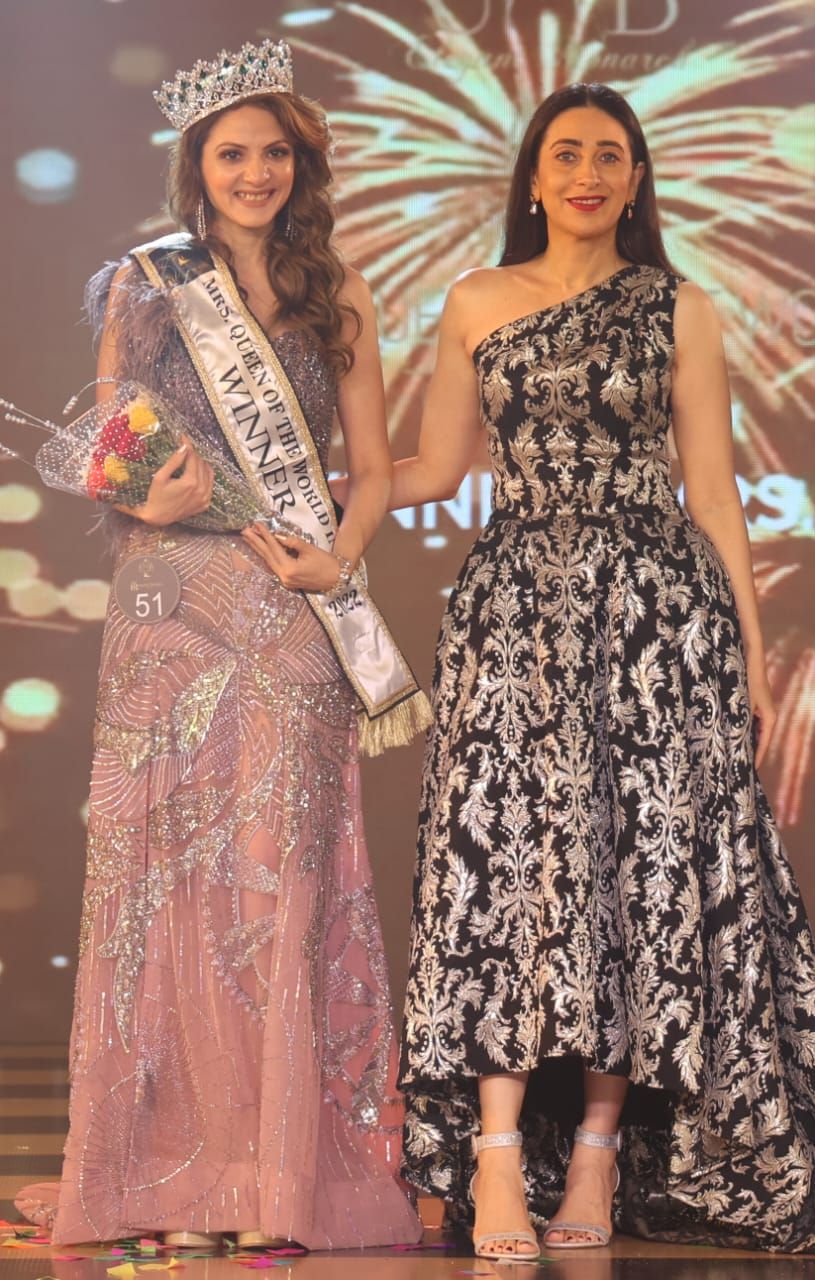 Priyanka Bajaj Sibal has been crowned the winner of Mrs Queen of the World India 2022 by the renowned Bollywood actress Karishma Kapoor recently at a Mumbai event celebrating glamour, confidence, and beauty!

The winner of Mrs Queen of the World India was announced on 20th October 2022 as Priyanka Bajaj Sibal. The famous Bollywood Actress Karishma Kapoor sashed Priyanka the prestigious title. Priyanka will now represent India on the international pageant platform, to be held in USA in March 2023.

This is the second National level pageant title for Priyanka after winning Mrs India 2021 last year. She is a Chartered Accountant and is working in a prestigious American University in Qatar in the finance domain. The Grand Finale of the Mrs Queen of the World India 2022 was a star-studded affair, hosted by Vishal Malhotra, Bollywood actor, along with Snigdha Baruah.

Post winning, Priyanka thanked the international pageant director Alice Lee Giannetta as well as India pageant directors Urmimala Baruah and Paras Walia, for providing women with a platform to make an impact and that promotes inclusivity and diversity. Congratulating the winners, Urmimala said, “Its fulfilling to see everybody’s hard work pay off. As our winners prepare for the international pageant in USA, we look forward to seeing them represent India with pride.
In the Grand Finale round, each finalist was provided 60 seconds to pen down their answer and then read out the answer. Priyanka was asked “what can a common man do to stop wars and communal riots across the world”, to which she responded very elegantly “As a peace-loving lady, my heart trembles to hear the echo of anguished cry during war which has no solace and targets all humanity. I believe one must use their voice for kindness, mind for truth and heart for spreading love and peace. Humanity must unite to put an end to war or war will put an end to mankind.”
The distinguished jury members included Sheena Bajaj, Dr Siddharth Bhargava, Dr Mickey Mehta and Dr Payal Dalal. The mentors who groomed the finale contestants were Abhinav Mathur, Dimpple Kapoor, Shagun Mendiratta. The show directors for the Grand Finale event were Alesia and Anjali Raut from Cocoaberry Academy. The star-studded evening was also attended by music composer Sajid Khan.
Priyanka had a special mention of her husband Siddharth Sibal, who is currently working in Accenture as a Director, has been a backbone for her during this entire journey.
Her introduction round was spectacular where she highlighted “Despite failing multiple times to clear my CA and the world telling me to give up, I raged forward with fire in my heart, tenacity in my soul, and fierceness that is dependable and now I work as a Chartered accountant in a prestigious American university. From being fat-shamed to an international model and a humbled national pageant winner, today, as a trailblazer, I stand in front of you – flawed, but fearless, and empowered by my perfect imperfections!”
Through initial screening from thousands of applicants, 60 contestants from many countries as well as different states of India were selected to be in the finale for the pageant.
Priyanka created a buzz on various social media platforms with her active engagement and following, and she ended up winning the prestigious title of ‘Social Media Queen 2022’ additionally besides the main title, at this glamourous evening.