LAUREN Comeau has shared a sentimental video of her and her son Eli, on their recent beach vacation to Cancun, Mexico.

But the beach vacay was just a mother and son memory.

In the video shared on Instagram, the two laugh, cuddle and goof off together on the beach and in the town.

She captioned the clip package: “In my momma feels tonight”

As the video clips segue, Lauren shared a prerecorded spoken word message titled The Moments I Will Never Forget. 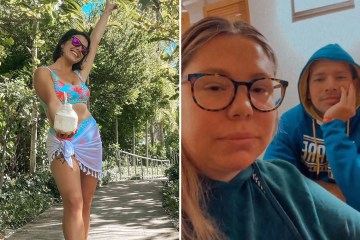 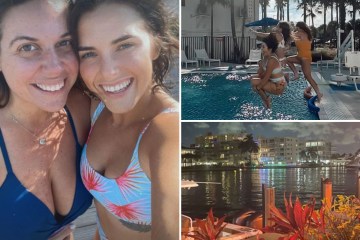 “I know they won’t remember this; They’re too little,” the voiceover states. “But I will.

“I know that the same moments they are never going to remember, I will never forget.”

Lauren’s happy times with Eli come after having to battle her ex, Javi, over accusations of abuse.

Last June, Javi filed a restraining order against his ex-fiancée.

Javi accused Lauren of hitting “him in front of their” son.

In the report, Javi claimed: “Respondent assaulted me in front of our children, I worry she will come to my house and assault me again and/or try to take our son.

“She has assaulted me on multiple occasions and due to my career I want to protect my job and kids.”

Javi continued: “Verbal argument she closed fist punched me several times. She snatched my gold chain off my neck. Our [then] 2-year-old son was present and witnessed.”

A temporary order of protection from abuse was granted since the court felt the “respondent has committed an act of domestic violence against the petitioner and further finds that there is an immediate and present danger of additional acts of violence.”

Lauren was ordered by the court to stay 100 feet away from her baby daddy, his residence, and his workplace, and was only allowed to contact him by text or email regarding Eli.

Then on June 22, Javi filed to voluntarily dismiss the petition as he claimed he no longer felt “threatened by my son’s mother. I believe we can handle any altercation that arises.”

But there are ongoing rumors Javi is rekindling his romance with Kailyn Lowry.

Earlier this week, the fellow Teen Mom star leaked texts from her ex-husband, Javi, asking if they can get back together.

The former partners, who split in 2017, share eight-year-old son Lincoln.

In a new clip from Teen Mom 2, Kailyn is seen venting to a friend about a “huge argument” she had with her second baby daddy.

Kailyn explains that Javi was upset that Lincoln wasn’t wearing a jacket during his football practice in December.

The MTV star is seen reading off their text exchange as she said: “This is from Javi, ‘no kid should go outside without a hoodie whether it’s practice or not.

“‘It’s not hard to make sure he has something on top. This is December not July.'”

However, Kailyn was not done there as she revealed a certain question Javi had before the jacket drama.

She told her friend: “And before this fight he said, ‘why aren’t we getting back together?’

“And I was like, ‘because I would literally never get back with you.’ I was like, ‘you make my blood boil when we fight and I just don’t wanna do it.'”

Kailyn and Javi have had a rollercoaster relationship as she previously claimed he asked her to marry him again.

However, there are also plenty of tense moments including the time Javi ripped Kailyn as “disrespectful” for allegedly asking his sister to be on her podcast.

This is not the first time that Kailyn has shared text messages as an Instagram fan account previously posted an exchange that was believed to be between Javi and her nemesis Briana DeJesus.

In the texts, Briana, 27, told Javi that she was planning on traveling to his home state of Delaware to film a podcast with Kailyn’s ex and third baby daddy Chris Lopez.