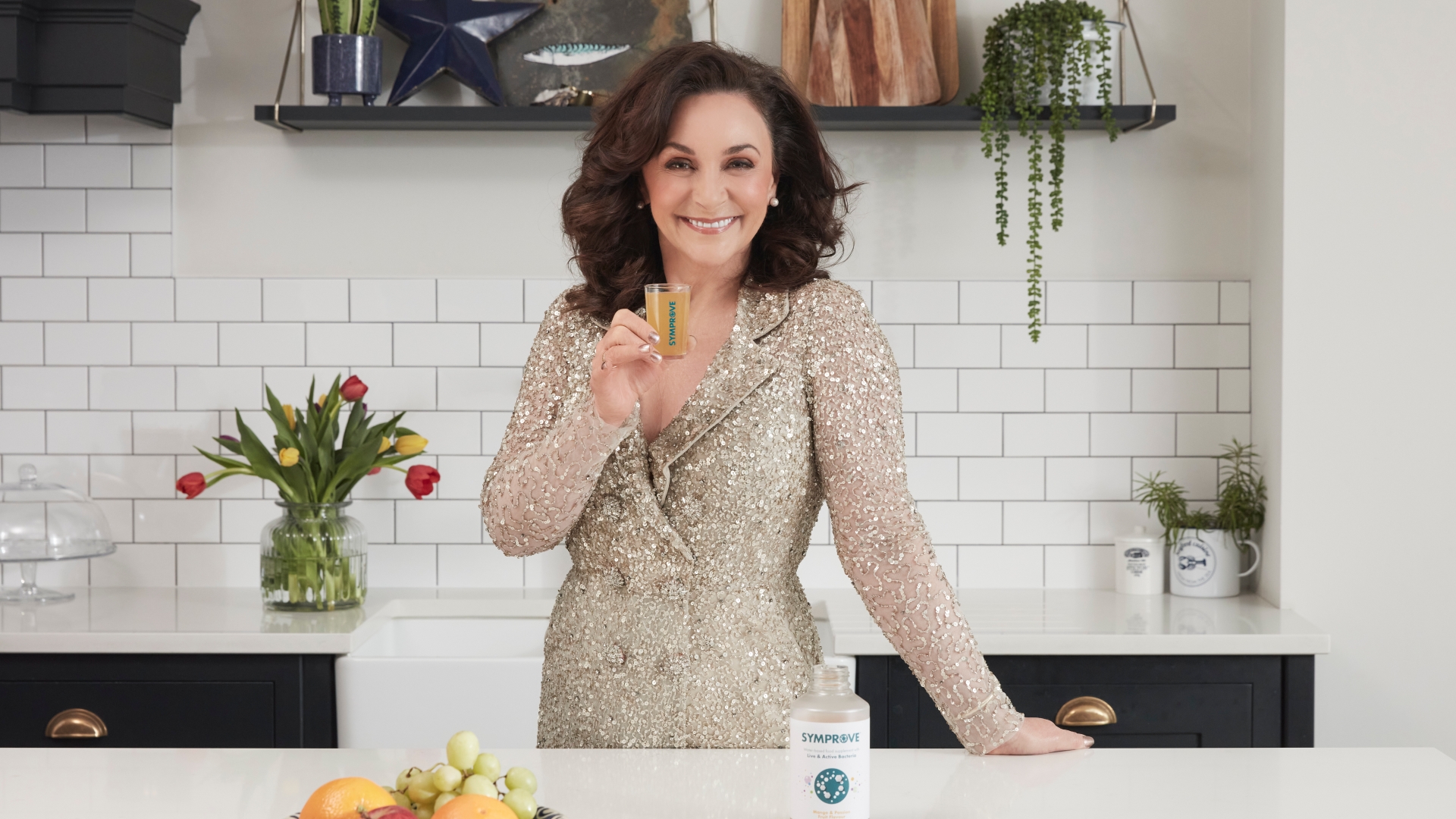 AS a championship dancer, you’d assume Strictly judge Shirley Ballas was completely in tune with her body – but for pretty much all her life, that’s just not been the case.

“For many, many years, my body was absolutely not in sync with itself,” says the 61-year-old who was born on the Wirral.

“I didn’t tend to go to the bathroom but once a week.”

She had pain, bloating and constipation for decades.

“Maybe it was a little easier while I was competing, because when you get nervous that seems to help the system a little bit,” she says, but it’s only in the last 18 months that she’s finally gotten a handle on her gut health.

“I was always looking for something that could help me line up my system and make me feel better.”

The Queen of Latin came across Symprove – a liquid probiotic – on social media and hasn’t looked back.

Combined with good hydration and regular exercise, now, “instead of going once a week, I’m going every day, so that’s just amazing.”

Whether she’s talking gut trouble, menopause (“I had too much testosterone – I was actually growing a beard!”) or plastic surgery, she puts it all out there.

Most read in Diet &amp; Fitness

It’s exhilarating when someone is so open about topics that, women especially, are often so hush-hush about.

Currently she’s trying Stephen R. Grundy’s The Plant Paradox with her son, Mark, 35, and her mum, Audrey Rich, 84, who lives with her.

The diet prioritises vegetables (crucially, cauliflower rice), although they’ve had a few disasters: “We still eat it if it’s all burnt and charred!”

“We stick to very, very light food and – my mother’s always done it – fasting, where you’re 16 hours off and eight hours on,” she adds.

“I feel that also helps me; I don’t feel so heavy.”

Shirley’s also switched from a dinner plate to a side plate – “it’s actually the size of your tummy” – to help manage portion sizes.

“The hardest thing for me is after six o’clock, if I’m on my own, Danny [Taylor, 48, her partner] travels and my mum’s gone to her room to watch her novellas, trying not to snack. I’m working on that.”

While many of us would scoff a tub of ice cream or a block of cheese before bed, Shirley might have a drink “with a sugar in it, or a biscuit”.

She finds it impossible to not incessantly count calories.

“That comes from years and years of training as a dancer and people never quite feeling that your figure’s good enough.

“I will never get rid of that,” she says, and is not convinced putting calories on menus is a good idea.

“I’m very conscious of exactly how much I’m eating a day.”

That pressure to be slim, to ‘fit’ and to constantly assess what she’s putting in her mouth is deep-seated.

“You don’t get round it, you don’t, it’s forever ongoing in our house,” says Shirley.

“I’ve just been cleaning all my wardrobes and getting ready for the next series of my own industry plus, of course, Strictly is fast coming up.

“We’re trying different things on. I have everything from a double zero, which is a super small size, all the way up to what I think is a comfortable size for me, which is a size eight or 10.

“Even if I’m trying trousers [I’m thinking], ‘Two more pounds there, they won’t feel quite so snug’.”

“It’s not something I want to be, but it’s something that’s just instilled and inborn in me,” says Shirley.

“And then you look at yourself and you think, ‘Oh, dear me.’”

‘Oh, dear me’ doesn’t exactly spring to mind when you see Shirley on the telly though – the woman is seemingly pure glamour and confidence.

But you never really know what’s going on inside someone else’s brain.

“Every person’s got to feel comfortable in their skin,” says Shirley, and she’s making a powerful effort to appreciate her flesh and bones and all they’ve done for her.

“I was doing Happy Baby (where you hold your feet in a stirrup position) at yoga and it was all quiet and hot, the class was packed,” she says.

“I was staring at my feet and for the first time I said thank you to my feet for 62 years of being able to let me dance.

“I’ve been so self-critical for so many years and this is going to sound very, very strange, but at 62, now I’m trying to say, ‘Thank you legs for carrying me through and thank you body for holding up and letting me do the things that I want to do’.

“I’m just trying to fall in love with the body that’s helped me do the things I’ve done.”

Despite the self judgement and the calorie count ticking away, Shirley is genuinely fascinated with taking care of her health and wellbeing.

Whether she’s doing hot yoga, riding her bike (“What I’ve realised is, 10 minutes is better than none at all”) or signing up to a juice retreat (she’s headed to Jason Vale’s: juicemaster.com this summer), she really commits and does her research.

‘Social media could have saved my life’

Shirley has a refreshing approach to social media.

“Nothing at all on social media could be worse than the industry I’m in,” she says, comparing it to the dance world.

In fact, she says 95 per cent of her social media interactions are “caring and kind” while only 5 per cent are “negative” or involve “explicit messages that are very disturbing” – those ones she blocks, deletes and laughs off.

Her fans have even helped potentially save her life.

“Wasn’t that amazing?” says Shirely, awed at the memory of several who messaged her to say they’d spotted a lump under her arm.

It set off a chain of tests for the star but fortunately the lump wasn’t cancer, and a shadow found on her kidney was also ruled as fine.

“Praise and thanks goes to those wonderful people who cared so much to even bother to say something.”

In terms of beauty, Shirley has no qualms about considering plastic surgery.

“At the moment I’m into keeping the skin clean and clear, the sunspots and the little veins, with some microneedling lift,” she explains, but no, she’s not ready for a facelift.

“If, down the line, I felt I wanted to have a facelift, then so be it.

“That’s my business and every woman is entitled to do what they think,” she says, full of fire.  “You want Botox? Have Botox. You don’t want Botox? Don’t have Botox.”

Her only advice is to research every nip, tuck and procedure before you get it, and then? “Do what makes you feel great.”

We all age, but what doesn’t wane is Shirley’s love of dance: “I’ll always have the same feeling because the heart never grows older does it, it’s only the exterior.”

Neither does her competitive edge. “I did Celebrity Juice once where we all had to put boxes on our heads and I had to win that game!” she says with a laugh.

“I’m very competitive with myself because I want to produce the very best version of myself – always.

“And that comes at a price really, sometimes you’ve got to give yourself self-check talks of: ‘Don’t be so hard on yourself,’ and, ‘It is okay to take an hour off.’

“I’m going to have my first pedicure in three years, and just to take that time out for myself, it took me three days to make that decision!”

She is “quite tough on myself”, but says she’s working on it.

“‘Til the day I pop my clogs, I shall be consistently working on the positivity side of myself. I’m in progress, I’m on the conveyor belt!”

Shirley Ballas is an advocate for the water-based probiotic Symprove, which delivers four unique strains of bacteria that reach the gut alive. To kick-start your journey, visit Symprove.com.