EXPERTS have raised fears the mysterious hepatitis outbreak in children could be fuelled by a new virus variant.

Parents have been urged to know the signs to watch out for, as more kids are struck with the illness.

The increasing cases in the UK, US and Europe are still being probed, but scientists now think the most likely cause is an adenovirus.

These are common viruses that cause flu-like and gastro symptoms, and usually resolve without any lasting issues.

In kids they generally spark a mild illness, with liver inflammation (hepatitis) quite rare in youngsters.

Traditionally the type of infections caused include the ear, common colds, pink eye and tonsillitis, with symptoms including coughs, sore throats, diarrhoea and fever. 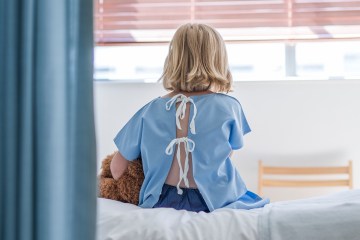 But between January and April, 104 cases of hepatitis in kids under 10 have been found in the UK – with eight needing liver transplants.

And Dr Meera Chand, Director of Clinical and Emerging Infections at UKHSA, said there is increasing evidence the hepatitis is linked with adenovirus infection.

Other avenues are also being investigated, such as another infection including Covid, or an environmental cause.

But experts have ruled out the Covid vaccines as none of the affected children had received a jab.

Dr Zania Stamataki, Associate Professor in Viral Immunology, Centre for Liver and Gastrointestinal Research, University of Birmingham, said: “Most of the children with hepatitis have tested positive for adenovirus infection which is circulating now, however the liver inflammation may have been caused by a previous infection that has now cleared.

“Sudden onset hepatitis may also be caused by a combination of insults to the liver, including viruses, toxins or drug treatments.

“The rising incidence of children with sudden onset hepatitis is unusual and worrying.

“If an adenovirus is to blame, this could be a new variant of adenovirus that may cause liver injury in children with naïve/immature immune systems.”

A Public Health Scotland epidemiologist has suggested children could be reacting more severely to an adenovirus due to not being exposed to as many germs in lockdown.

Writing in the journal Eurosurveillance, Dr Kimberly Marsh said: “The leading hypotheses centre around adenovirus — either a new variant with a distinct clinical syndrome or a routinely circulating variant that is more severely impacting younger children who are immunologically naive.

“The latter scenario may be the result of restricted social mixing during the pandemic.”

Parents have been urged to help prevent the spread of viruses by supervising their children when washing their hands to make sure they are doing so thoroughly.

Respiratory hygiene includes encouraging children to catch their sneezes in a tissue or the crook of their elbow and coughing into their hand.

Dr Chand said: “We are working… to swiftly investigate a wide range of possible factors which may be causing children to be admitted to hospital with liver inflammation known as hepatitis.

“Information gathered through our investigations increasingly suggests that this is linked to adenovirus infection.

“We are also calling on parents and guardians, to be alert to the signs of hepatitis (including jaundice) and to contact a healthcare professional if they are concerned.”

Short-term hepatitis often has no noticeable symptoms, the NHS says.

But the 10 main hepatitis warning signs are: