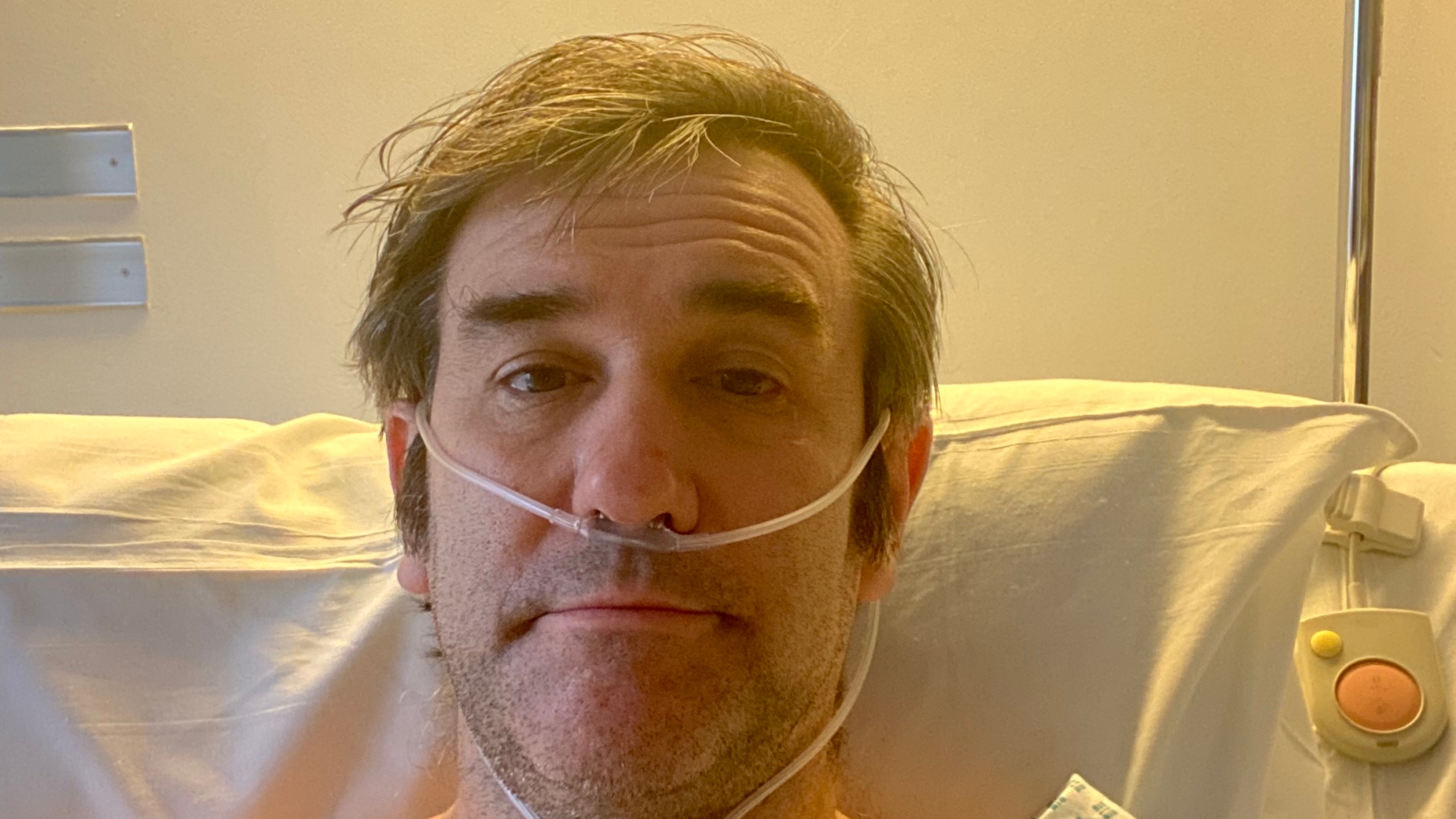 THE thing that reduced me to tears after my arthritis diagnosis was when my consultant looked me in the eye and said: “The only football you’ll be playing in the future is walking football.”

I’d seen videos of pensioners hobbling around sports centres at a snail’s pace, pretending to enjoy their kickabout, and the idea of joining their slow-motion, arthritic ranks filled me with dread.

If I’d ignored my degenerative osteoarthritis — which was not the groin strain I hoped my physio-therapist would diagnose — then yes, the future would have been increasingly painful and inactive, and perhaps I’d have ended up wheelchair-bound.

Which is apparently Liam Gallagher’s preference.

The Oasis frontman, 49, told MoJo magazine: “I’m not going to crisp it having my hip cracked, thank you. I’d rather be in a wheelchair, with (fiancée) Debbie (Gwyther) pushing me around, like Little Britain.” 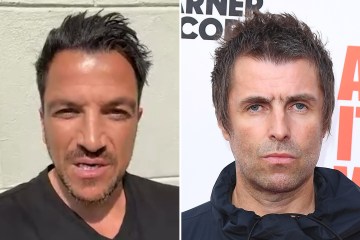 Admittedly it was only my left hip giving me trouble, rather than both being “f***ed” as Liam says.

However, rejecting a full hip-replacement — and continuing to be unable to tie my shoelaces, cut my toenails, run, play football, get into a car or even walk without pain — wasn’t an option for me.

Netflix back catalogue I don’t have the super-cool image of an edgy Britpop icon to maintain, but I do have teenage children — Art, 13 and Aoife, 16 — who were more than happy to remind me that, “Hip operations are normally for pensioners aren’t they, Dad?”

My consultant raised an eyebrow as he checked my date of birth. But I’d rather be mobile — at least until I need this one replaced in about 20 years — than wheelchair-bound just because of some perceived stigma. Liam, who is using Deep Heat cream and herbal sleeping tablets to battle his pain, also has the autoimmune condition Hashimoto’s thyroiditis and fears a hip op could kill him — although the risk is surely slimmer than the chance of an Oasis reunion.

Professor Max Fehily, consultant orthopaedic surgeon at Spire Manchester Hospital, says: “The risk of death following a hip replacement, across all ages, is roughly one per cent but in the younger demographic it is significantly less than with older patients who may have other conditions such as heart or kidney disease.

Overall, risks from surgery are roughly four to five per cent and include infection of the new hip, blood clots in the legs or lungs, nerve injury, dislocation of the new hip, breaking the thigh or pelvic bone, a need to redo the replacement and medical complications such as heart attack and stroke — but these are mainly in the elderly population.

“However, these risks must be balanced against those of not having surgery, such as chronic pain, reduced fitness and all the mental health implications of not being active.”

An MRI scan diagnosed my arthritis last June and by February this year I was in theatre at the Gateway Surgical Centre in Newham, East London, waiting for the general anaesthetic to kick in.

My consultant tried to persuade me to opt for a local anaesthetic but the prospect of hearing a surgeon sawing a hole in my hip before replacing it with a shiny new one was as appealing as listening to one of Oasis’s later albums on repeat.

Ninety minutes later, high on pain relief, I was back on the ward with a new ceramic femur, plastic sockets replacing my withered cartilage, and 21 metal staples clamping my wound shut.

Admittedly, my left flank resembled a rotting pork joint for 48 hours, and the staples could have graced a slasher movie, but the industrial-strength painkillers meant the first 36 hours passed in a largely pain-free haze. By day two, I’d abandoned my Zimmer frame, and after a further 12 hours shuffling around the ward on crutches was discharged to continue my rehab at home.

As I live alone — I shipped my Jack Russell to a friend for a fortnight — no loved ones had to endure my moaning. So I felt it only fair that I share my grisly post-op snaps via WhatsApp — to universal revulsion.

Then, while working my way through Netflix’s back catalogue, I got stuck into a smorgasbord of meds that would probably have floored even Liam and his brother Noel during their Oasis heyday. Painkillers to numb the aching laceration, anti-coagulants to stop potential deep vein thrombosis, anti-inflammatories to reduce swelling, antibiotics to prevent infection — and the all-important stool-softeners.

I also had an array of not-so-sexy mobility accessories. A sock aid to shoe-horn my socks on. A litter-picker device for lifting things up — and a bathroom freedom wand, or bottom buddy, which is essentially a sponge on a stick designed to help you reach those body parts rendered temporarily inaccessible by the op.

Badminton with kids My confidence and bowel movements weren’t their best during those first few days, but the low point came two weeks later when Satan — otherwise known as the district nurse — arrived to remove my staples.

My pain threshold is somewhere between non-existent and “Get the f*** off me!” — and after an hour of failing to cajole me into letting her prise the metal spikes from my leg before it turned septic, I sent poor Lucifer packing.

Convinced I’d persuade A&E to administer a local anaesthetic before torturing me, I headed to Whipps Cross Hospital in Leytonstone, East London, where a nurse with the bedside manner of the world’s most laid-back airline pilot somehow persuaded me that, anaesthetic-free, everything would be all right and gently exorcised my staples in less time than it took for me to mumble, “I’m such a baby!”

Six weeks and dozens of hours of daily physio later and the staples and scarring, now healed, are a distant memory. Such is my generous body hair, by the time midsummer arrives any remaining scarring will be camouflaged.

I’m not yet leaping about a tennis court like two-time Wimbledon tennis champ Andy Murray, who had hip resurfacing surgery in 2018, but compared to my massively compromised pre-surgery movement, the transformation is significant.

Prior to the op, I’d been unable to kick a football properly for nine months. The last time I ran anything but the tap was last summer. Racket sports or anything involving lunging were out of the question.
A month before the op I had to shell out £38 to get my toenails cut — my children refused, even though I reminded them I’d spent years wiping their backsides — and manoeuvring myself in and out of a car felt like failing to do the limbo.

Even sleeping had become a nightmare. Any pressure on my left hip would wake me. Post-surgery, it’s a different story. Cutting my toenails is simple. My sock aid and bottom buddy are history — and for the last three weeks I’ve been playing badminton with my children, lunges and all, with no ill effects.

I also ran 5K this week and I’m probably three or four weeks away from playing five-a-side — and I definitely won’t be walking.

“I think I’d rather just be in pain,” is his typically contrary response to the prospect of an easier life. “Which is ridiculous, obviously. But it’s the stigma, saying you’ve had your hips replaced.”

For Liam, what’s next is likely less mobility and more pain. With the millions he’s got in the bank, he could have a new hip in a week and be back running on Hampstead Heath near his home in North West London by the time he turns 50 in September.

Whichever route he takes he won’t live for ever — but he might increase his chances of staying hip just that little bit longer.

THERE are approximately 100,000 hip replacements carried out each year with “very high levels of success”, according to Professor Max.

He says: “Typically, I would always try to manage someone’s condition without a replacement, but if physiotherapy, steroid injections and activity modification is not enough then sometimes replacement is the best option.

“The warning signs to look for would be patients presenting with pain in their groin, buttock and leg, with night pain and increasing stiffness.

“This can make it difficult to put on shoes and socks and cause the patient to limp when walking any distance.

“But most patients who have a full hip replacement will regain a very good range of movement, which will allow them to do multiple activities, such as sports, skiing, gym work, yoga etc.”

If a patient is anxious about feeling any stigma, Prof Max starts by chatting through their concerns with them.

He adds: “I explain the operation and recovery, talk them through the pros and cons and explain the real benefits they can expect afterwards.

“I would explain the measures we take to reduce the risks, such as using robotic-assisted surgery to give greater precision.

“Occasionally, we will introduce patients to similar people who have had replacements so they can hear from patients who have been through it and whose lives have been transformed for the better.”