JOHN Barrowman has fueled the Britain’s Got Talent “fix” controversy after backing Loren Allred to win the show.

Singer Loren, 32, was given a golden buzzer pass to the final by judge Amanda Holden during Saturday’s instalment of the ITV show.

Amanda’s choice sparked a “fix” row after it was later revealed that Loren was the voice behind The Greatest Showman song Never Enough.

Despite the negativity on social media, Loren took to Instagram yesterday to thank everyone for their kind words after her appearance on stage.

Many rushed to the comments section to show their support, including actor John.

He said: “I have always been a fan and think it’s amazing you are getting your time in the spotlight. 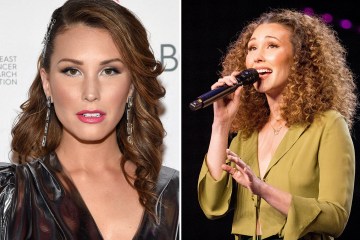 His comment indicates that he knew her before the show, so she isn’t new to the showbiz world.

Loren’s post said: “Britain’s Got Talent was such an incredible experience 🇬🇧

“I just want to seriously thank everyone for all the love and support, it means the world to me❤️

“And its not over yet…. we still have the semi finals coming up! If you haven’t seen my storytime on how my audition went, check it out on my TikTok 🥰 .”

The singer, from New York, travelled all the way to London to audition for the much-loved show.

Loren performed Never Enough from The Greatest Showman and impressed Amanda so much that she was given her golden buzzer.

However many dubbed the competition “unfair” because a professional singer sailed through to the next round.

She previously recorded the vocals for The Greatest Showman.

Loren has hit back at the ‘fix row’ in an exclusive chat with The Sun.

But Loren has since defended her experience in the music industry – insisting: “I am an unsigned, independent artist still trying to make a name for myself.”