RAPPER and internet personality Bhad Bhabie is no stranger to controversy ever since her rise to fame as the “Cash me ousside” girl from Dr Phil.

The 19-year-old, whose real name is Danielle Bregoli, has made a name for herself from her music career to feuds with well-known celebrities.

The multi-millionaire Danielle found fame as a confrontational teen on a 2016 episode of Dr Phil after being brought to the show by her mother Barbara Ann.

Barbara revealed that she was pulling her hair out over her child – who would run away four times in one day and steal her credit cards.

While her life was laid bare on camera, Danielle became annoyed at the audience members who were laughing at her.

Turning to threats, Danielle asked the audience: “Catch me outside, how about that?” 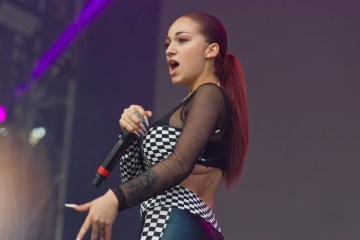 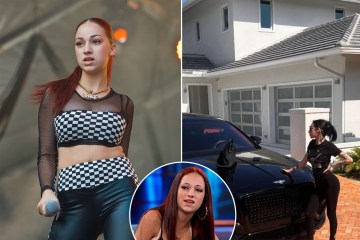 But, because of her accent, it sounded a lot more like: “Cash me ousside, how bow dah?”

This has become her signature catchphrase – and a meme that has gone viral all over the internet.

The teen used her newfound fame to launch her rap career, with the single These Heaux releasing in September 2017.

Danielle became the youngest person ever to hit the Billboard 100 Charts.

From a young age, Danielle had gotten into multiple physical fights, including some with her own mother.

An old video went viral back in 2017 of then 11-year-old Danielle seemingly being pinned to the floor and hit around the face by her mother at their Florida home.

Cops were called in after they were contacted by a concerned viewer, who filed an official complaint.

The mother and daughter were seen wrestling and fighting in the video. It’s not known when the fight took place, but it seems to have started after Barbara asked for her phone back from the teen.

Police were called to the family’s home multiple times in the past to deal with the domestic situations.

Danielle denied that her mother was beating her up and insisted that the two were just “play fighting.”

The teen made headlines after getting into another altercation when she was 13-years-old, this time on a flight.

Danielle claimed that a passenger had screamed and shoved her mother, prompting the teen to throw a punch on a Spirit Airlines flight.

The teen, her mother and the other passenger were all taken off the flight, however, no arrests were made.

All three were banned from Spirit Airlines for life, according to the company.

Danielle and her mother have also received flack for their words. In an Instagram Live video back in 2017, a woman believed to be the teen’s mother could be heard screaming “You f***ing Muslim” so someone over the phone.

The woman says: “You used to beg my daughter to come and stay at your house because you’re f***ing lousy …. your momma has been selling her f***ing a** in Fort Lauderdale.”

Danielle then interrupts: “Her momma used to have to order us food at 3am because she wasn’t there to make us anything.”

Although some parts of the video are inaudible, the woman believed to be her mother continues screaming: “Ho, ho you f***ing Muslim… go look on your f***ing Facebook page and …your father and mother with a thing around her head.

The young girl on the phone can be heard saying “Look, listen, listen,” but can barely get a word in before Danielle starts screaming and yelling.

Danielle’s father had posted the video on a GoFundMe page but then quickly took it down as the family wanted to focus on more “positive things.”

In 2018, Danielle’s fans accused rapper Eminem of stealing the teen’s hit Hi Bich, claiming that his track Not Alike uses the same flow.

One fan wrote: “It’s weird to think that a rapper who is by many still known as the goat took his flow from a 14 year old girl who got famous from being weird on Dr. Phil’s show.

Another fan using the name Todd posted: “Wtf is eminem doin on ‘not alike’ the beat is nearly identical to ‘look alive’ and the flow is a complete rip off of ‘Hi Bich’”

However, fans of Eminem defended the rapper claiming the song was a satire of Danielle and other similar rappers.

One user tweeted: “To all the morons saying that “Not Alike” by Eminem is a ripoff of “Hi Bich” by Bhad Bhabie…

“It’s f*****g satire. He’s making a point. Grow a brain. Do you honestly believe that Eminem would to take the time to rip off such a brainless song? Jesus Christ, people are dense.”

Another added: “No man, he was intentionally making fun of those “rap songs”, like bad and boujee, hi bich, etc so he used the same style to show anybody can do it.”

Eminem is said to be back in the studio and working on new music already – which is reported to be a scathing attack on Machine Gun Kelly.

Responding to the storm based around her track Danielle tweeted: “I’ll take that compliment”

Danielle received a lot of attention over how her looks have changed over the years and took to Instagram last year to shut down “facial reconstruction” rumors but admitted to other domestic procedures.

Alongside a collage of photos of her “looking different”, the singer wrote: “I got 1/2 syringe of lip fillers a couple months ago , veneers and sculptra and silicone in my butt I’ve told y’all that multiple times.

“What’s the point of my wearing make up if it don’t make me look better? Im only 18 why would I get full facial reconstruction surgery when I don’t even know how I’m gonna look when I get older?” she asked.

Danielle continued: “Only when I wear make up and/ or wigs y’all say I got surgery and compare it to pics of me at 13… no one else looks the same at 18 as they did 13 14 everyone has a glow up.

“Some ppl was ugly a** hell as kids and look amazing now. Y’all literally have all grown up y’all know what goes on,” the rapper explained.

“When I do get my nose done I will b glad to let y’all know but funny thing ab me is I’m scared as hell Of being put under anesthesia so I would never even do that over some looks only if it was a life or death situation or something for my health,” she confessed.

In the same post, Danielle shared a video as she addressed the plastic surgery rumors.

“This is going to be my last time addressing this,” she told fans in a black and white clip.

“That’s the point of wearing makeup. I have a fat a** nose so I like to make it smaller with makeup,” she admitted.

Danielle ranted: “People do contour on their cheeks, even though I already have jawline nice cheeks nice whatever.”

In April 2021, Danielle launched her OnlyFans page just days after turning 18 and bragged that she made $1million in her first six hours.

While the content does not have to be explicit on the site, it’s best known for its involvement in the sex industry and is used by celebrities like Cardi B, Bella Thorne and Jordyn Woods.

She raked in more than three-quarters of a million from her baseline subscriptions, which cost $35 a month at the time.

Back in August, Danielle revealed she’s a multimillionaire and could retire if she wants to.