IF you’ve spent a significant amount of time on social media, you’ve likely come across an extremely popular cleaning hack or two.

Cassandra Aarssen, a decluttering expert up to speed on the latest trends in cleaning, decided to review these viral tidying hacks on her cleaning-centered YouTube.

“I’m gonna test all of these viral cleaning products that I’ve seen on TikTok,” Aarssen began her video.

“My best friend owns her own cleaning company and she is obsessed with trying new cleaners, so I thought I’d give it a try too.

“I’m gonna test them so you don’t have to, and see what’s worth the money, and what’s not.”

Diving right in, the first thing the determined woman reviewed was two mops from the brand Vileda. 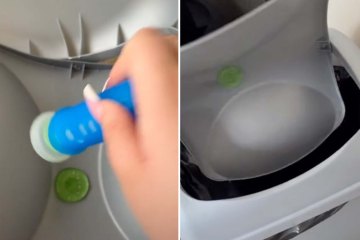 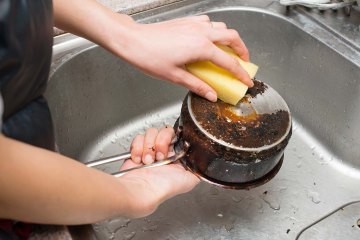 One was a standard spin mop while the other, a microfiber rag mop, was a quick-drying mop. The microfiber mop was the more expensive of the two, costing $15 more, and was meant to absorb more dirt.

She tested both of the mops using the same buckets and same cleaning solutions, mopping the floor at the exact same time.

In the end, she made a note of which bucket of water was dirtier to determine which mop picked up more dirt.

After testing the water, she stated: “I’m so excited, because the cheaper mop has way dirtier water. And, I just find it easier to use. It’s easier to mop with, it’s smoother, and way better at collecting dirt.”

Next, she decided to try out a TikTok ‘recipe’ for mopping your floor.

The formula consisted of a Cascade dishwashing tablet, Tide laundry detergent, and some Fabuloso in really hot water.

She compared it to her regular “old, boring” multipurpose cleaner that she usually uses on her floors.

The results came as a shock. Dunking two glasses into the individual mop waters, it was clear that the TikTok solution for mopping the floor was far superior.

BATTLE OF THE DUSTERS

Among them was the Scrub Daddy Damp Duster, which is supposed to “magically pick up all the dust.” Next on the list was a Norwex dusting microfiber cloth, as well as her favorite Swiffer Duster.

She predicted that the Swiffer Duster wouldn’t do a great job, and after testing the dusters on a wooden table, she was proven right. In the battle of dusters, the microfiber cloth won by a landslide.

“My advice is definitely to go with a microfiber cloth. It’s cheaper and more effective,” she stated.

She noted though, that the Scrub Daddy Damp Duster did a better job at leaving a streak-free finish after the table had dried.

THE BEST SPONGE AROUND

Up next on the agenda was sponge testing.

Aarssen compared the TikTok famous Scrub Daddy sponge that she noted was expensive, to a dollar store sponge.

Scrubbing an old pan, she used one sponge on each side.

After rinsing and wiping the pan she reported: “I don’t really see a difference. Maybe the Scrub Daddy side is slightly cleaner, but is it worth the price? It’s really not noticeable with the naked eye so I’m gonna say this is up to you.”

THE MOST STREAK-FREE GLASS CLEANER

Finally, the cleaning whizz tried three different glass cleaners on a mirror to see which one worked the best and was the most streak-free.

She tested Method glass cleaner and Bon Ami glass cleaner using a paper towel, and used a Norwex glass cleaning cloth with just water, noting that that’s all the cloth required to work.

While the Norwex glass cleaning cloth was streak-free, it left dust residue. The Method glass cleaner on the other hand left lots of streaks.

Meanwhile, the cheapest option, the Bon Ami cleaner left no dust and no streaks, making it the most ideal for sprucing up mirrors.

WHAT WORKED AND WHAT TO AVOID

The Vileda standard spin mop, the TikTok mopping solution recipe, the microfiber cloth for dusting, and the Bon Ami cleaner for glass all got the stamp of approval by Aarssen.

Meanwhile, the Vileda quick-drying mop, the Swiffer Duster, the Norwex glass cleaning cloth, and the Method glass cleaner did not meet the cleaning savvy woman’s standards.