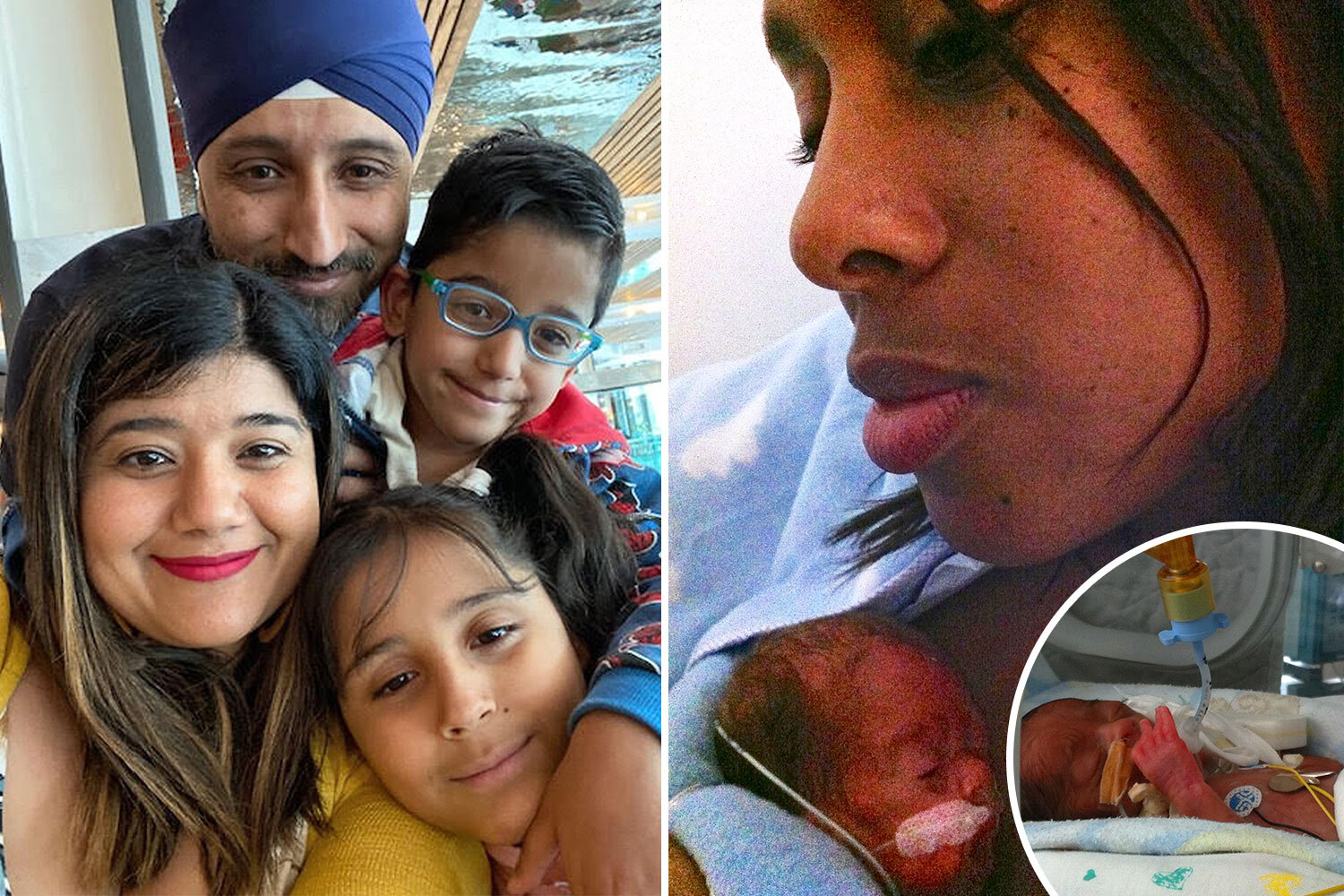 AS the nurse handed Kal Osahan one of her newborn twin boys, the tot’s eyes opened and he gave her a smile.

Little Roop was 13 days old and it was the first time his mum had been able to hold him. Moments later, he passed away.

Roop and twin brother Guraj had been born 14 weeks premature in September 2015 when Kal was 26 weeks pregnant.

The pain of her loss came flooding back after footballer Cristiano Ronaldo and his girlfriend Georgina Rodriguez, 28, announced the loss of one of their newborns this week.

The 37-year-old Manchester United striker shared his heartache on Instagram, saying: “It is the greatest pain that any parents can feel.

“Only the birth of our baby girl gives us the strength to live this moment with some hope and happiness.” 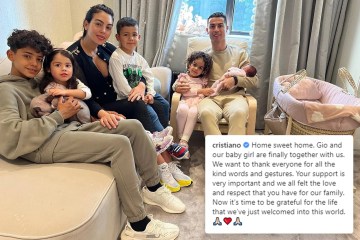 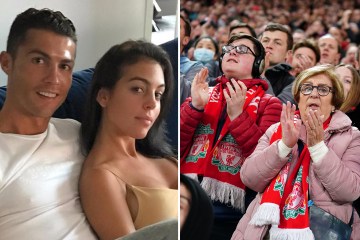 She says the pain of losing Roop will never leave — but his brother gave her the strength to go on.

She recalls: “After Roop’s life-support was switched off, the doctors handed him to us.

“He opened his eyes and for a brief second gave us the hint of a smile.

“That pain you feel deep inside and it never goes away.

“But if I hadn’t had his brother Guraj, I think it would have been even worse.

“I had a reason to live, a reason to be strong and to keep going. When he died I felt this wave of strength wash over me. I carried on.

“It is hard when it comes to birthdays and the anniversary of his death.

“You think about what would have been. Would the boys have been close?

“You celebrate one’s achievements but feel the loss more keenly too. I know Ronaldo will soon do the same.

“I always want to make the birthday special for Guraj but I also have to allow myself to cry as much as I want to. Crying really helps. You can’t bottle it up.”

On average, pregnancies with twins fare worse than those with one baby.

A report last year found that twins are 3.5 times more likely to die in the first 28 days after birth and twice as likely to be stillborn.

Twins are also more likely to be premature and the pregnancies have complications more often.

“It was the worst thing that’s ever happened’

NADIA LEAKE was just 22 weeks and six days into her pregnancy when she went into labour in 2012.

Three weeks later she was registering newborn Harrison’s birth — and the death of his twin brother Raif, who had been born with a hole in his heart.

After his death, at three weeks old, Nadia, a medical rep, and husband Martin, 47, divided their time between the neonatal ward and the mortuary.

They read the same book — Guess How Much I Love You, by Sam McBratney — to both boys and also left a copy in Raif’s tiny coffin.

They would also dress him and sing to him.

Nadia, 44, says: “It was a very sad time, but also the time I got to be a mum to him. I kissed him from head to toe, I wanted to know every bit of him and physically be his mum.

“I’d go from the newborn intensive care unit to the mortuary and just collapse to the floor in pain.

“After one baby dies there’s a fear that the worst can happen to the other one,.”

Raif and Harrison arrived following five rounds of IVF and a tough pregnancy where Nadia experienced sickness and pelvic pain.

She went into labour while visiting family in London.

Nadia, who lives in Whitley Bay, Tyne & Wear, says: “We’d been away and were in a service station when I noticed a lot of blood.

“We were only a few minutes from Barnet Hospital. I was fully dilated.

“It was so early and I was trying not to panic but thought, ‘This can’t be happening’.

“The view was that the babies would be born to die, which was so hard to take in because I could feel them kicking.”

But when they arrived, on August 12, 2012, weighing 1.1lb each, they were resuscitated and then transferred to the bigger Queen Charlotte’s and Chelsea Hospital in West London.

“For a few weeks we got to know them,” says Nadia. “It was wonderful. Harrison was bolshy and cheeky.

“He would bat medics away. Raif was so chilled and relaxed.”

When I found out, I fainted,” says Nadia. “It was the worst thing that’s ever happened but I had another tiny baby who was also sick to care for.

“I would want families who have lost a child to know Raif’s being here, if only for a short time, was a blessing.”

Nadia, who also has son Mason, five, with Martin, says: “I love Raif as much as my living children. Love and grief are two sides of the same coin.

“Harrison can’t remember his brother but has pictures of him in his room and both him and Mason know all about him.

“I’ll say Raif’s name daily. We have a special ‘Raif Day’ every year and there’s a special place at the table for him on Christmas Day.

“But we’ve always made certain Harrison’s birthday is just about Harrison.

“We need him to know he’s a person in his own right and we love him so, so much.

“It isn’t a day for grieving but a day for celebrating our lovely twin boy.”

‘It was the most beautiful thing’

KAL recently told her surviving son Guraj about his twin.

She says: “He asked a lot of questions. I said that Roop is an angel flying around in heaven. Talking to Guraj helped bring a little closure for me.”

Kal fell pregnant, also after IVF, in May 2015. In a tough pregnancy, she suffered a condition called placenta previa and several bleeds.

She had also been told that one baby had a hole in the heart.

Kal says: “It was scary but there was a plan in place for him to have surgery after birth so I tried not to worry.”

But at 26 weeks Kal suffered a bleed for the fifth time and doctors decided to perform a caesarian.

Kal says: “I worried about the boys being born so early but I didn’t have a choice. All our lives were at risk.

“I didn’t get to see the boys right away. They were rushed to intensive care and later transferred to a specialist neonatal unit at Norfolk and Norwich University Hospitals NHS Foundation Trust.

“I’d lost a lot of blood and was lucky to survive the operation myself so I was not transferred until three days later when I was strong enough.”

Kal and Bharminder hoped the boys would get stronger but around day ten they were told that Roop was struggling.

He underwent several procedures and was also diagnosed with sepsis. He then stopped breathing.

Kal says: “They’d managed to get him breathing again. Everyone around me was trying to be hopeful, but in my heart, I knew he was going to die. Something in my gut just told me.

“The doctors kept explaining what they were doing but in reality he was very poorly. He wasn’t getting better.

“I wanted someone to say it out loud. Death is part of our lives. By now I had accepted what was going to happen.

“It was harder for my husband. But the next day we went to see him and his toes had gone dark purple or black.

“I think that is when the penny finally dropped for Bharminder.”

The couple later agreed to take Roop off life-support.

This was when Kal was able to hold Roop for the first time and the baby opened his eyes and smiled.

“It was the most beautiful thing,” she recalls.

“A nurse had got him dressed into clothes we’d bought for him and put him into a Moses basket in a private room so we could be with him.

“Guraj was moved so the boys could be next to each other.

“They took casts of his hands and feet. I would never have thought to do this at the time but they are very precious to us now, so I’m very grateful to the hospital.”

Roop passed away in his mum’s arms on October 9, 2015. But as Kal let one boy go, the other grew stronger.

“The first day I held Guraj was the day we held Roop’s coffin,” she says.

“We were told he’d have to stay two or three weeks at Norwich but after a week he came back to Broomfield. After three months, he came home.

“I feel lucky I had two babies. I had one to keep me going. I can’t imagine what it would be like to have one and to lose them.

“I know it is a tragic thing that happened to me but it is one tragedy among millions of tragedies. I still consider myself lucky.

“That bond, that love can never go away. Sometimes I think he is still near me, maybe he is.”

Kal has since tried to raise awareness of baby loss.

She says: “It is a terrible, sad thing that sadly happens every day.

“I feel Ronaldo’s pain. But we shouldn’t be talking about it now only because Ronaldo is famous.

“There is a lot of stigma around the loss of a baby.

“You should not feel ashamed. It’s not your fault. No one should be expected to get over it or move on. You never will. It stays with you.

“There are charities such as Bliss and Tommy’s that offer support. I lost a child. I won’t forget him.

“I still tell myself I’m lucky to have the moments with him I did.”

No need to feel guilty

FOR support if your baby is born premature or sick, visit the charity Bliss, at bliss.org.uk.

Peter Bradley, its director of services, says: “Having a baby or babies spend time in neonatal care is a devastating experience for families.

“And the emotions felt by parents of twins and multiple babies in neonatal care can be particularly conflicting if they are experiencing the grief of losing a baby while facing a neonatal journey with their surviving baby.

“We often hear from parents that they feel guilt for feeling joy for the surviving baby.

“Forty per cent of twins spend time in neonatal care when they are born, due to the increased likelihood of being born premature and increased risk of pregnancy complications, or specific conditions such as twin-to-twin transfusion syndrome.

“We provide information and support to help all parents to know that whatever they are feeling after having a baby or babies admitted to neonatal care is OK and they are not alone.

“Support is available by reaching out to us at hello@bliss.org.uk or by contacting our friends at twinstrust.org or sands.org.uk.”