MAURICIO POCHETTINO could make a sensational return to Tottenham and bring Christian Eriksen back with him.

The Argentine is reportedly set to be sacked by Paris Saint-Germain despite winning the Ligue 1 title.

And a bombshell report from Le Parisien says boss Antonio Conte has sensationally offered to ditch Spurs less than a year after joining to take over at PSG.

Tottenham, who axed Pochettino in November 2019, are the favourites to be his next club.

This could tempt star striker Harry Kane NOT to move away from North London.

He has been tipped to force a move away this summer but appeared to snub Manchester United after the club’s decision to appoint Erik ten Hag over Pochettino. 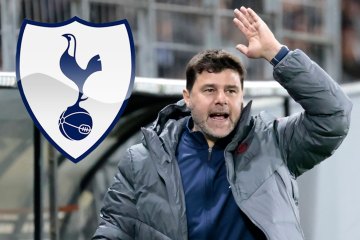 And now his ex-manager could convince him future is at Spurs in a reunion with the England striker.

The 30-year-old’s Bees deal expires in the summer, with Christian Eriksen tipped to secure an emotional comeback.

Fan’s favourite Eriksen meaningfully embraced his ex-team-mates before the goalless draw with Brentford on Saturday.

Skipper Hugo Lloris and Kane both gave the midfielder massive hugs in the tunnel as he continued his astonishing return from a cardiac arrest.

Kalvin Phillips would solidify the Whites behind an electric attack.

The Leeds star is one of SIX incoming transfers being targeted, according to reports.

Pochettino could also bring Marquinhos from PSG along with him.

21-year-old Wilfried Singo could sign from Torino to cement the right-back spot, which has changed hands all season.

Singo joined the Italian club as a centre-back when just a teenager but has now shifted to the right side of defence where his pace and dribbling skills can be utilised.

Alternatively, Ryan Sessegnon could rediscover his form again under Pochettino, the man who gave the green light on his £25m arrival at the club.

And Conte-signing Dejan Kulusevski could make way in the starting XI for linked Marcus Thuram.

That is according to The Athletic, who report that Gladbach are willing to sell Thuram in the upcoming summer transfer window for a bargain price.

Spurs are supposedly preparing to offer Inter Milan defender Stefan de Vrij £100k-a-week as they look to secure his signature this summer.

De Vrij’s current contract at the San Siro expires at the end of the 2022/23 campaign.

Sergio Ramos is also available on a free and has struck up a relationship with the former Spurs boss at PSG.

Ramos, 36, is looking to rejuvenate his career after injuries this year.

If Spurs can bring in new centre-backs, Eric Dier could slide back into the defensive midfield duties he carried out under his old gaffer.