STEVEN GERRARD gave a glowing review of Erik ten Hag – but joked his opinion counts for nothing with Manchester United fans.

United confirmed Ten Hag would take over as manager in the summer on a three-year deal after he impressed during the interview process.

He has a major task on his hands rebuilding an underperforming squad and trying to get the struggling club back competing for trophies again.

Gerrard was quizzed on the Red Devils’ appointment of the Dutchman.

And the Aston Villa boss lavished praise on the departing Ajax chief for his brand of football that has been so successful in the Netherlands and in Europe.

The ex-England captain said: “Manchester United’s a very big football club, and obviously the project he’s got there, where they are at the moment, the current form, of course it’s going to be huge. 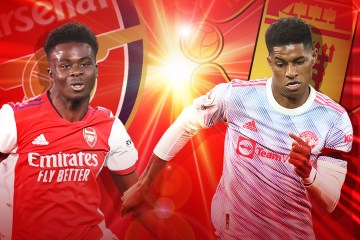 “But it’s none of my business, and I’ve got my hands full here with the project and the challenge here, I’m very excited about that.

“Obviously there’s a lot of football to be played before he comes in the door.

“I like the style, I’ve followed him for many years, I’ve seen him do really well in European cup competitions as well.”

But Liverpool icon Gerrard quipped the United supporters will not listen to his views, anyway.

The legendary midfielder was born on Merseyside and played 710 times for the Reds, lifting nine trophies including the 2005 Champions League.

And after enjoying his fair share of battling derbies against United, he added: “Obviously it’s a very positive appointment from their point of view.

“But no one in Manchester will care what I say about Manchester United, as you know!”