I HAVE lost count of the number of times my two young daughters have watched The Greatest Showman.

Ever since its 2017 release, the film has played on repeat in our home and the girls are still singing the songs obsessively.

Now, as we stepped into Great Yarmouth’s Hippodrome Circus, it felt like we were travelling back in time to watch the real thing.

Built in 1903, the Hippodrome is a historic gem — Britain’s only surviving circus building, complete with a floor that sinks as it transforms into a pool.

While the Hollywood film may have ringmaster Hugh Jackman at the helm, we were treated to hilarious hosts Johnny Mac and Jack Jay, who had adults and kids alike in fits of giggles. Bring an umbrella if you’re in the front row!

With start-to-finish laughs, the mesmerising highlight was an acrobatic troupe from South America, who entertained us with a death-defying springboard act, culminating in a blindfolded leap through a flaming hoop. 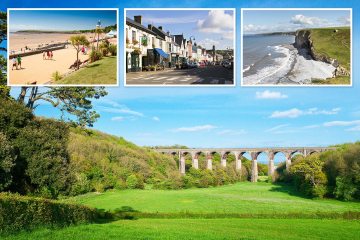 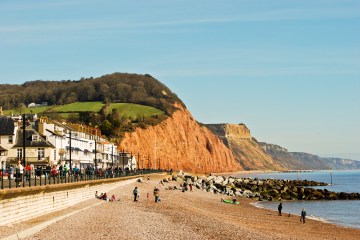 The exhilarating circus show is just part of what gives this resort town on Norfolk’s coast its traditional beachy charm.

We were staying at Richardson’s Holiday Park in nearby Hemsby — which is just as geared up for a day out as the main town itself.

The park’s Quarterdeck venue has cabaret acts and there’s a bowling alley, climbing wall and swimming pool on site, plus a fish and chip shop, Posh Plaice.

Although if you’re looking for a great value dinner, you may want to visit the main strip.

Cafe Ocean has an outside terrace and serves cracking steaks, pizza and kids’ grub.

And for a tea break there’s the award-winning Sara’s Tea Rooms, which has been open since 1999 and serves hearty lunches and home-baked scones — make sure to try the coffee cake too. It’s worth using the hop-on, hop-off bus (£7 for the whole stretch and £4 for the seafront) if you’re off out exploring.

But when we weren’t lazing in the hot tub of our two-bed lodge, days were spent by Great Yarmouth Pleasure Beach, just a few minutes’ walk away, where there’s a strip of amusement arcades with ice-cream and fast food stands.

My two girls Savannah, 11, and Scarlett, eight, couldn’t wait to get on the rides, including the new thrill-seeking Pendulum, which has riders swinging side to side before doing a full loop.

But us adults were more drawn to the family-friendly Lightning 360, where you can enjoy brilliant views of the sandy beaches for miles — or the log flume, which will leave you well and truly soaked.

Holidaymakers are never left waiting for any of the rides for too long either, as numbers are limited in each three-hour session — so make sure to cram in as much fun as you can.

Those who aren’t adrenaline seekers should pay a visit to Sea Life, where you won’t just get to see the fish, you’ll be able to interact with them too.

We came face-to-face with sharks and jellyfish, dipped our hands in the tanks to stroke the starfish and giggled as a colony of penguins were fed before our eyes.

If you’re willing to head a little further down the coast to Winterton on Sea, you’ll get to experience sea creatures in their natural habitat.

We hadn’t counted on the company of two nosy seals passing by after we’d taken a paddle, but they kept us entertained for a thrilling 30 minutes as we watched them flop about from a distance.

Although the circus certainly had its thrills and laughs, it was these grey seals that really put on the greatest show.

STAYING THERE: A three-night self-catering break at Richardson’s Holiday Park starts from from £815 in October, based on a family of four sharing a Platinum Plus Lodge. See richardsonsholidayparks.co.uk.

OUT & ABOUT: Tickets for the Hippodrome Circus cost from £22 per adult and £13 per child, see hippodromecircus.co.uk.